If you love period pieces and fantasy shows, you know that hair and makeup can transform an actor from an everyday person to a king and queen of a faraway land. The House of Dragon cast is no exception.

House of Dragon is a prequel to HBO’s Game of Thrones, which ran for eight seasons from 2011 to 2019. Both series are based on George R.R. Martin’s A Song of Ice and Fire books. House of Dragons—which is specifically inspired by Martin’s 2018 novel, Fire & Blood—is set 200 years before the events of Game of Thrones and chronicles the beginning of the end of House Targaryen and the events leading up to the the war of succession for the Targaryen crown, also known as the Dance of Dragons.

RELATED: Click Here For the Best New Binge-Worthy Shows You Haven’t Seen—But Should

In an interview with Vanity Fair, creator Ryan J. Condal explained how Martin came to him with the idea for House of Dragon. “George very kindly involved me in this project nearly four years ago. It was September of 2018 when I got called up to the major leagues,” he said. “After that, in the midst, we had this whole pandemic situation that seemed to make time roll back on itself. It just feels bizarre, in a way, after making this thing seemingly inside of a vacuum over in Watford, England, for so long, to suddenly have an audience full of people in a theater [watching] a finished show. There were times that it felt like it would never get finished.”

Condal also told Vanity Fair about how much more of a budget House of Dragon had for its first season than for Game of Thrones‘ first season before the show became a bonafide hit. “We went into the series knowing that this was a time of high decadence. We consider this the apex of the Targaryen empire, so we really wanted to communicate this idea of wealth and prosperity and the fact that there had been six years of peace,” he said. “The Targaryens really were able to develop all the nice things that happened: peacetime, statues and art, and roads and fountains.” He continued, “I think the original Game of Thrones feels…some of this is due to just, those poor guys had a fifth of the resources that we have now. But thanks to the great success that they earned along the way, we were just given it when we walked in the door. We used that to really make this seem like the previous [show] feels like an empire in decay, the great dynasty has fallen, the Targaryens are gone. They’ve been replaced by Robert Baratheon, who is not known for being a progressive leader who puts coin back into the betterment of the kingdom.” 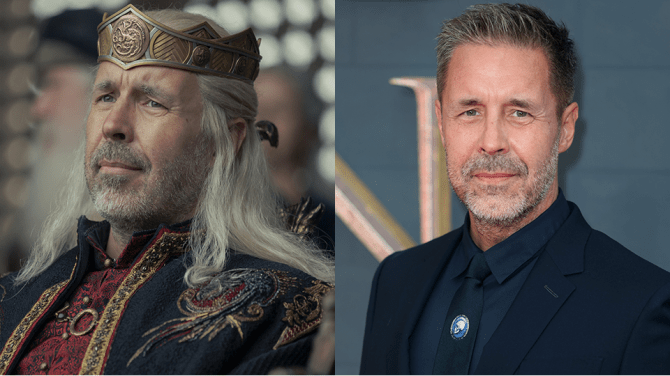 Paddy Considine plays King Viserys I Targaryen, the fifth king of the Seven Kingdoms. Viserys became king of the Iron Throne after he was chosen by a council of lords to succeed his grandfather, Jaehaerys I Targaryen. He is the father of Princess Rhaenyra Targaryen Read HBO‘s official description of King Viserys I Targaryen: “Viserys was chosen by the lords of Westeros to succeed the Old King, Jaehaerys Targaryen, at the Great Council at Harrenhal. A warm, kind, and decent man, Viserys only wishes to carry forward his grandfather’s legacy, but as we’ve learned from Game of Thrones, good men do not necessarily make for great kings.”

Along with House of Dragon, Considine has also starred in shows like Peaky Blinders, The Outsider, Third Day and movies like In America, My Summer of Love, Doctor Sleep and 24 Hour Party People. He’s won two British Academy Film and Television Awards. His first win was in 2008 in the Best Short Film category for Dog Altogether. His second win was in 2012 in the Outstanding debut by a British Writer, Director or Producer category for Tyrannosaur. 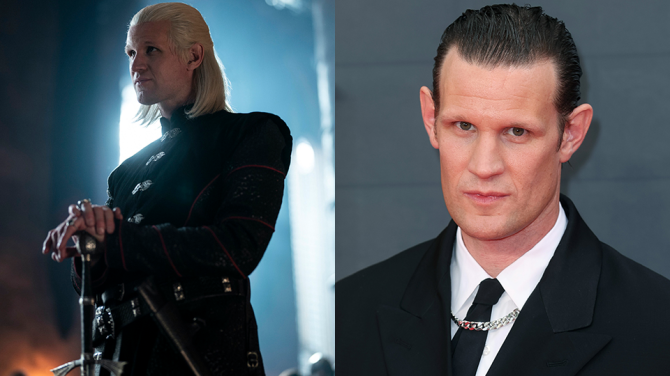 Matt Smith plays Prince Daemon Targaryen, the younger brother of King Viserys I Targaryen and the grandson of Jaehaerys I Targaryen. He is the heir presumptive to the Iron Throne and the unclear of Princess Rhaenyra Targaryen. Read HBO‘s official description of Prince Daemon Targaryen: “The younger brother to King Viserys, and peerless warrior and dragonrider, Daemon possesses the true blood of the dragon. But it is said that whenever a Targaryen is born, the gods toss a coin in the air…”

Along with House of Dragon, Smith is best known for his role as the Doctor in the 11th incarnation of Doctor Who, as well as Prince Philip in The Crown, which earned him an Emmy Nomination in the Outstanding Supporting Actor category in 2018. Smith played the Doctor from 2010 to 2013 and was the youngest actor at the time to play the character. He’s also starred in movies like Womb, Terminator Genisys, Last Night in Soho and Morbius as the Marvel character Milo. 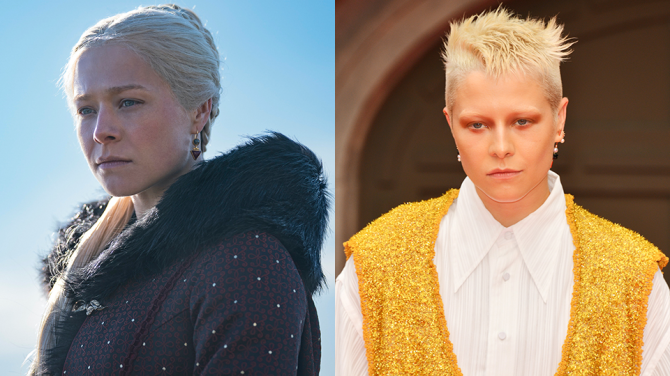 Along with House of Dragon, D’Arcy has also starred in shows like Truth Seekers and Wanderlust. D’Arcy, who identifies as non-binary and uses they/them pronouns, graduated from the University of Oxford, where they studied Fine Art. 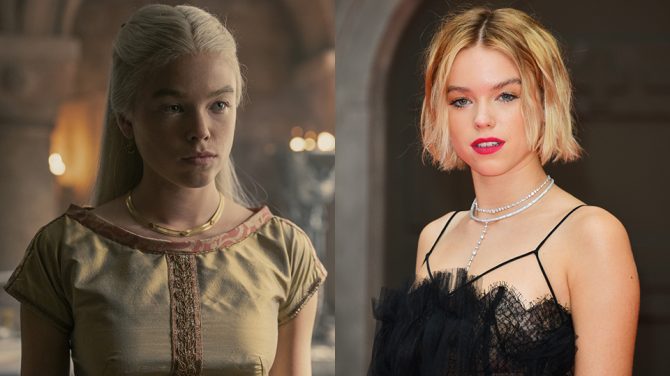 Milly Alcock plays young Rhaenyra Targaryen. Emma D’Arcy plays older Princess Rhaenyra Targaryen. Along with House of Dragon, Alcock, who is from Australia, has starred in shows like Janet King,  A Place to Call Home, Fighting Season, Pine Gap, Les Norton, The Gloaming and Reckoning. Her longest role was as Meg in The Upright from 2019 to 2022. 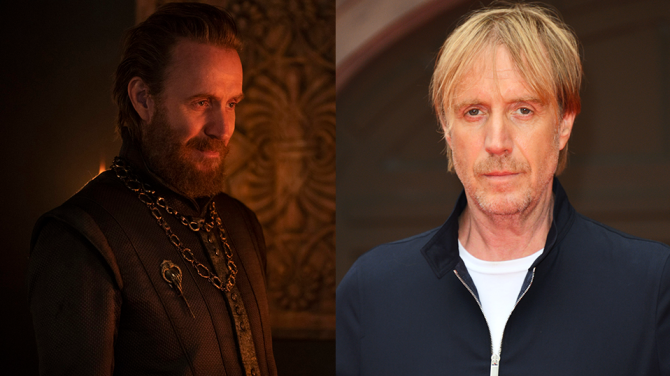 Rhys Ifans plays Ser Otto Hightower, who serves as the Hand of the King to King Viserys I Targaryen. He is also the father of Lady Alicent Hightower and a rival of Prince Daemon Targaryen. Read HBO‘s official description of Ser Otto Hightower: “The Hand of the King, Ser Otto loyally and faithfully serves both his king and his realm. As the Hand sees it, the greatest threat to the realm is the king’s brother, Daemon, and his position as heir to the throne.”

Along with House of Dragons, Ifans is the lead singer of the Welsh bands, the Peth and Super Furry Animals. He’s also starred in movies likeNotting Hill, Kevin & Perry Go Large and Enduring Love, as well as played Xenophilius Lovegood in Harry Potter and the Deathly Hallows – Part 1  and Dr. Curt Connors / Lizard in The Amazing Spider-Man and Spider-Man: No Way Home. He also starred in The King’s Man as Grigori Rasputin, as well as Mycroft Holmes in the show Elementary. 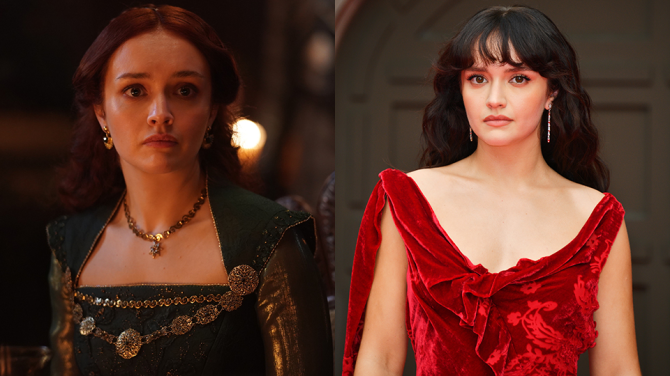 Along with House of Dragon, Cooke has also starred in shows like Bates Motel and Vanity Fair. She’s also had roles in movies like Ouija, Me and Earl and the Dying Girl, The Limehouse Golem, Thoroughbreds, Ready Player One and Sound of Metal. 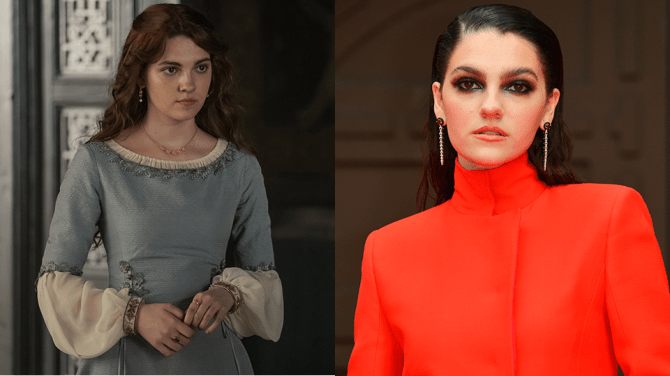 Emily Carey plays young Alicent Hightower. Olivia Cooke plays older Lady Alicent Hightower. Along with House of Dragon, Carey has starred as Grace Beauchamp in the show One’s Casualty from 2014 to 2017 and 2021, as well as Mika Cavanaugh in Get Even. 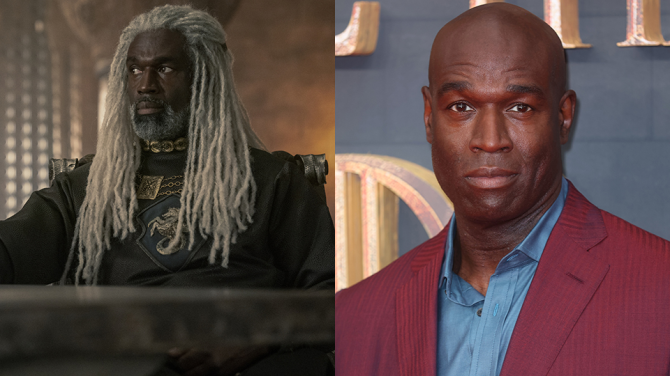 Along with House of Dragon, Toussaint, who is of Barbadian descent, has starred in movies likePrince of Persia: The Sands of Time, Judge Dredd and Shooting Dogs. 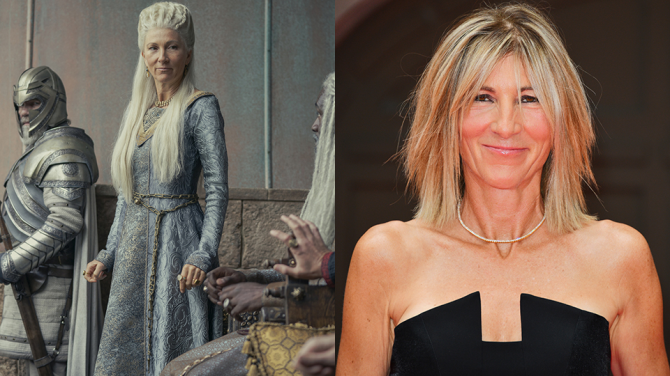 Along with House of Dragon, Best, whose first name is Emily, has starred in shows like Nurse Jackie, American Experience and The Honourable Woman. She’s also had a role in the movie The King’s Speech. She won an Olivier Award in 2006 for her performance as Hedda Gabler in the self-titled play. She also received a Tony Nomination for her performance in the 2007 Broadway revival of A Moon for the Misbegotten. Her second Tony nomination was for the 2008 revival of Homecoming.

In an interview with The Guardian, Best revealed that she had never seen Game of Thrones before filming its prequel.” I was a complete Game of Thrones virgin. I knew it was a big deal but was unprepared for the sheer, gobsmacking scale of it. Walking on to the set was like walking into New York but instead of towering skyscrapers, it’s Dragonstone. The crew was nearly 4,000 people, which was jaw-dropping. I’ve caught up since,” she said.

Due to House of Dragon‘s connection to Game of Thrones, Best also explained that everything, from the scripts to her audition, were kept top-secret. “Everything was very secretive. To audition, we were initially sent a scene from the original Game of Thrones with the names changed,” she said. “We weren’t even told the title of the new show. When eventually I was sent a real script, I loved the writing. Ryan [Condal] and Miguel [Sapochnik, co-showrunners] hooked me in immediately with the driving theme of the series. There is a line my character says early on: “Men would sooner put the realm to the torch than see a woman ascend to the Iron Throne.” Lose the word “Iron” from that sentence and it feels all too relevant. To top it all off, they told me my character was a dragon rider. I was in!” 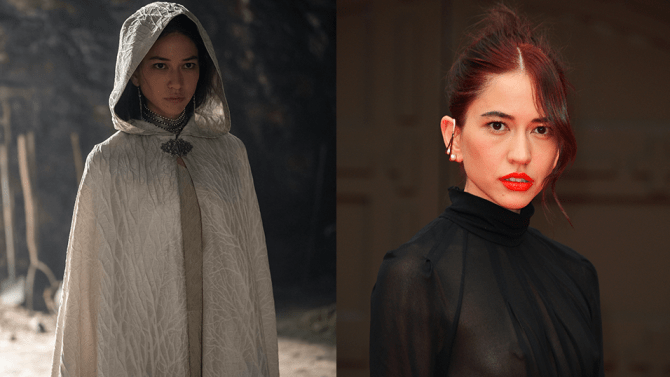 Sonoya Mizuno plays Mysaria, a foreign-born dancer who is Prince Daemon Targaryen’s most trusted ally. Read HBO‘s official description of Mysaria: “She came to Westeros with nothing, sold more times than she can recall, and she could have wilted… but instead she rose to become the most trusted – and most unlikely – ally of Prince Daemon Targaryen, the heir to the throne.”

Along with House of Dragon, Mizuno has starred in Alex Garland’s movies Ex Machina, Annihilation and Devs. She’s also had roles in films like La La Land, Beauty and the Beast and Crazy Rich Asians, as well as the show Maniac. 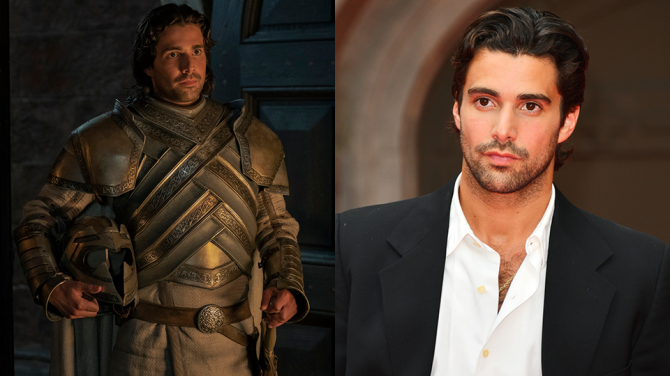 Along with House of Dragon, Frankel has starred in projects like Last Christmas, NYPD Blue and The Serpent. He is the son of actor Mark Frankel.

House of Dragon is available to stream on HBO Max. Here’s how to watch it for free.

Our mission at STYLECASTER is to bring style to the people, and we only feature products we think you’ll love as much as we do. Please note that if you purchase something by clicking on a link within this story, we may receive a small commission of the sale.