KIM Kardashian was spotted leaving a dermatologist’s office with her figure on display and her face hidden behind a pair of Yeezy shades.

The reality star recently launched a skincare brand of her own called SKKN.

Weeks after the launch, and amid much backlash about the brand, Kim was spotted stepping out of Epione skin care clinic in Beverly Hills, California.

She wore a form-fitting black ensemble, showing off her signature curves and slim waist.

While her body took center stage, her face was shielded behind a protective mask and an oversized pair of Yeezy sunglasses.

It’s unclear what – if anything – the Kardashians star had done at the clinic, but fans are speculating. 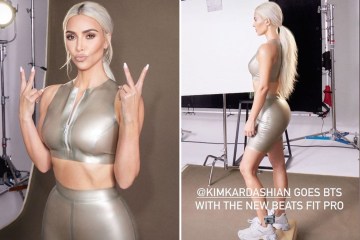 In the weeks since SKKN launched, fans have been buzzing about whether Kim uses her products.

Last month, fans spotted what they believed to be a telling detail in the background of one of the star’s photos.

At the time, Kim shared a mirror selfie of herself in a hotel room where she posed in a silver bodysuit from SKIMS.

Eagle-eyed fans noticed that there appeared to be an assortment of products on Kim’s bathroom counter, but nothing from SKKN.

Most read in Entertainment

The post came shortly after Kim launched her new skincare line, which is made up of nine products that she recommends using daily.

Fans were confused as to why there were no SKKN products sitting on the bathroom counter in the snap.

Instead, one suggested they saw a bottle of $9 Cetaphil moisturizer as opposed to Kim’s own $72 face cream.

“And yet you expect us to drop 100 bucks on SKKN moisturizer?” they asked.

“Cetaphil, Secret, and Olaplex… am I a billionaire?” raged another, referring to Kim’s immense net worth.

A third concluded: “So the verdict is SKKN is nowhere to be found.”

Price has been a point of contention for fans since the line’s launch.

The complete collection, which includes a cleanser, a toner, and an exfoliator, costs a whopping total of $673.

Customers can also add on specialist products, including a hyaluronic acid serum and night oil, which cost $90 and $95 respectively.

Kim described her new range as “prestige” in an interview with The New York Times, causing fans to slam her as “out of touch”.

Even Real Housewives of New York City alum Bethenny Frankel had something to say about the cost.

The Bravo star took to her TikTok account, where she had been reviewing skincare products for her fans, to share her thoughts on SKKN.

She used the exfoliator and under-eye product in the video, saying of the duo: “I know these two products very well.”

She kicked off her review by saying: “Any line that makes it like you really need to do all of the steps is just doing a smash and grab job because your skin is different every day.”

Bethenny started with the eye cream first, saying: “The packaging: This is an eye cream.

She continued: “I don’t understand it because it doesn’t stack.

“I don’t have a circular house or medicine cabinet, so… it doesn’t even have a flat bottom so it’s effectively like an A – I guess it has a tiny little flat bottom, but that’s impractical at best.”

Holding the second product up to the camera, Bethenny complained: “This is crazy. It’s gigantic.”

“It’s just not practical and I’m a very practical and organized person. This shocks me because don’t the Kardashians organize their jelly beans by color?”

In another clip, she appeared to be trying the exfoliator, snapping the case open and closed.

Bethenny continued: “Only Kim Kardashian could take a Rubix Cube, next time open it up – that’s a good idea.

“You know what? That’s a Wet ‘N Wild idea. Open up the Rubix Cube and it’s skincare.”

Her review wasn’t all negative.

“The actual product of the exfoliant has a little bit of a fragrance – no problem – and it’s got those micro white granules, you know, we’ve seen them before.

“I feel like it was ProActive or somebody else had those mice white granules. Different lines have them.”

She continued: “I like that form of exfoliating. Is it worth the money they’re charging? Unlikely.”

“This is definitely good skincare. This is quality, I just think it’s extremely impractical in its packaging … it’s a good quality product that’s likely somewhat overpriced, but most beauty is overpriced.”

The SKKN eye cream retails for $75, while the exfoliator costs $55.

Fans have been loving Bethenny’s skincare reviews, and her SKKN video is no different.

Another joked: “‘Don’t the kardashians organize their jelly beans by color’ SENT ME.”

Other fans seemed to agree with her notes about the range, with one commenting: “The packaging is such a good call out. Who has room in their makeup bag for that!!!”

“Best review ever,” someone else chimed in, while a fourth wrote: “Thank you for your honesty.”